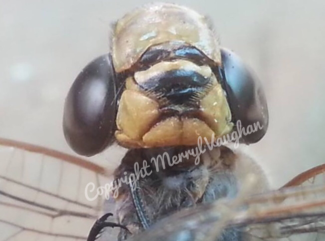 Didn’t know where he came from.

We only knew that his flight on beautiful wings had brought him into the safe haven of our leafy green deck. His final flight.

Who was he? Where had he come from?

There was something special, something fascinating, and a sort of sadness, in his wizened expression.

I felt strangely drawn toward our “Intergalactic visitor”….I wanted to know more about him.

Sadly I reminisced, now I guess I will never know. 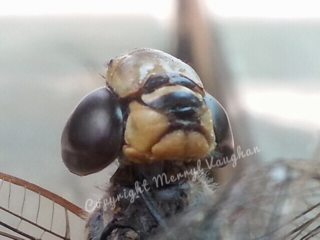 The above portrait photos of this wonderful Dragonfly and photos below were taken with an App on my phone, using magnification and camera. (Photos Copyright: Merryl Vaughan)

Our visitor “from Space” now has me intrigued and has started me on a journey to learn more, some of which is shared here.

Dr Dan Bickel, an entomologist with the Australian Museum, says that the dragonflies’ powerful eyes and impressive flying abilities are chief among their abilities.

“They can fly further, higher and faster than most insects, sometimes at speeds of up to 70km per hour.”

Dragonflies are able to propel themselves upwards and downwards, backwards and forwards, side to side and hover in midair.

And many of these flying abilities are thanks to the insect’s distinctive wings. 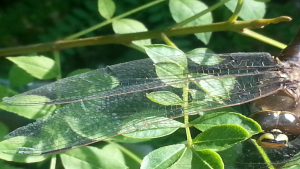 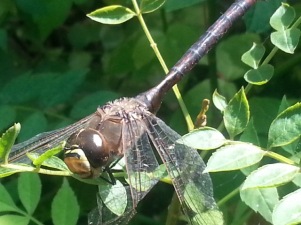 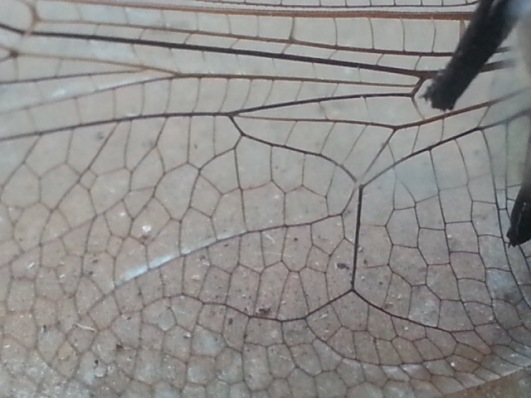 The dragonfly has two sets of wings — one behind the other — that can be used in tandem or independently.

Running through each wing is a network of veins that adds strength and flexibility. This allows the dragonfly to curve and cut through the air.

This vein structure is held together by a very thin, shiny film made from chitin (pronounced kite-en); a starch variation that makes up the exoskeletons of most insects.”

Dr Ken Walker, Senior Curator of Entomology and Arachnology at Museum Victoria says chitin in its natural form is translucent and it’s the “extreme thinness” of dragonfly wings that make them appear glassy.

Also, not all dragonfly wings appear glassy. With some 6,000 species worldwide — 320 of which are found in Australia — there is a great variety to how their wings look.

Some are transparent while others are brightly coloured, reddish, brown or even metallic. Those which lack pigment look more pure and glassy.”

The following is quoted from “Backyard Buddies”, an education initiative of the Foundation for National Parks & Wildlife (Australia): “Dragonflies have another secret, making them one of the best predators in your backyard. They have mastered the art of camouflaging themselves while flying.

The dragonfly manages motion camouflage by adjusting its position to always occupy the same spot in its prey’s retina – so they can track other insects with incredibly intricate manoeuvring that makes them appear motionless to their target. They achieve this by using a system even more sophisticated than the radar-avoiding technology of aircraft.

Dragonflies can catch their prey in mid flight by forming a basket with their spiny front and middle legs.”

Nature speaks to us in so many ways. yet most distinctly it speaks of a Creator, The Creator, God Almighty, who made heaven and earth and all things in it. Jesus said that God clothes the lilies of the field and that He feeds the birds.

This is beautifully expressed in Psalm 104.

“BLESS (AFFECTIONATELY, gratefully praise) the Lord, O my soul! O Lord my God, You are very great! You are clothed with honor and majesty–

Who lays the beams of the upper room of His abode in the waters [above the firmament], Who makes the clouds His chariot, Who walks on the wings of the wind, Who makes winds His messengers, flames of fire His ministers. [Heb. 1:7.]

You laid the foundations of the earth, that it should not be moved forever. [Job 38:4, 6.] You covered it with the deep as with a garment; the waters stood above the mountains. [Gen. 1:2; II Pet. 3:5.] At Your rebuke they fled; at the voice of Your thunder they hastened away. The mountains rose, the valleys sank down to the place which You appointed for them.

You have set a boundary [for the waters] which they may not pass over, that they turn not again to deluge the earth.

He sends forth springs into the valleys; their waters run among the mountains. They give drink to every [wild] beast of the field; the wild asses quench their thirst there.

Beside them the birds of the heavens have their nests; they sing among the branches. [Matt. 13:32.]

He waters the mountains from His upper rooms; the earth is satisfied and abounds with the fruit of His works.

He causes vegetation to grow for the cattle, and all that the earth produces for man to cultivate, that he may bring forth food out of the earth– And wine that gladdens the heart of man, to make his face shine more than oil, and bread to support, refresh, and strengthen man’s heart.

The trees of the Lord are watered abundantly and are filled with sap, the cedars of Lebanon which He has planted, Where the birds make their nests; as for the stork, the fir trees are her house. The high mountains are for the wild goats; the rocks are a refuge for the conies and badgers.

[The Lord] appointed the moon for the seasons; the sun knows [the exact time of] its setting. You [O Lord] make darkness and it becomes night, in which creeps forth every wild beast of the forest.

The young lions roar after their prey and seek their food from God. When the sun arises, they withdraw themselves and lie down in their dens.

Man goes forth to his work and remains at his task until evening.

O Lord, how many and varied are Your works! In wisdom have You made them all; the earth is full of Your riches and Your creatures.”

My garden is full of delights! It fills the senses with beauty, color and wonder. It helps me to understand beautiful truths about God, the Creator of heaven and earth. View All Posts

So that a herald may run with it

BY GRACE THROUGH FAITH

Harness The Healing Power of Nature

Little Pieces Of Me

Everyone Has Something To Teach Us

Into the heart of things

Sharing experiences and thoughts from my heart

Explore the world with us

Why Birds Sing in Key with Music, or how I finally put perfect pitch to use.

A site devoted to Ficus bonsai

DarylMadden
Watts Up With That?

The world's most viewed site on global warming and climate change